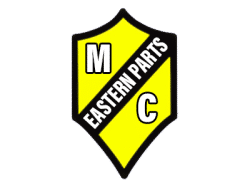 Eastern Motorcycles Parts, Inc., was begun in the mid-1960's by Gil and Carol May in their garage, where Gil repaired both their own motorcycles and those of some of their friends. After a few years spent building a solid reputation, the couple decided to open their first retail and repair shop, Gil's Cycle Shop, on Long Island, New York. They also sold tanks, pipes, pistons, patches, and other motorcycle parts, and did  repairs that ranged from rebuilding generators and rods to complete motors. If a part could not be purchased from the limited suppliers at the time, Gil would have a local machine shop make three or four of that part for him. Then, knowing he would eventually be able to use them,
he would have the machine shop make 25, 50, or even 100 of the part to keep on hand. The Mays eventually decided to buy or make these hard-to-find parts themselves and sell them wholesale to other repair shops and in 1972, Eastern Motorcycle Parts, Inc., was born.  In addition to selling tanks, pistons, cylinders, fenders, and other parts wholesale, the company manufactured some parts, such as case bushings, sprocket shafts, pinion shafts, and crank pins, and sent them out for heat treating and grinding. In 1987 Eastern moved to Blackville, South Carolina, where they continue to expand in both retail sales and manufacturing, with many items produced start to finish inhouse. Thirty-five years after inception, Eastern Motorcycles, Inc., is still a family-owned business and is run by Gil, his wife Carol, and son Jeff. Most recently, the company has expanded into the manufacturing of motor parts for the original Indian Chief and Sport Scout models